Long-distance transport of iron and sediments

A new study led by members of CENPERM,

published in Scientific reports, Nature Publishing Group, show that sediments and nutrients can be transported surprisingly far in the marine environment. It can affect how effectively the marine environment in the future can absorb carbon dioxide from the atmosphere. The results have been obtained by the researchers by use of a new particle camera developed in cooperation with the German research institution MARUM, Bremen. 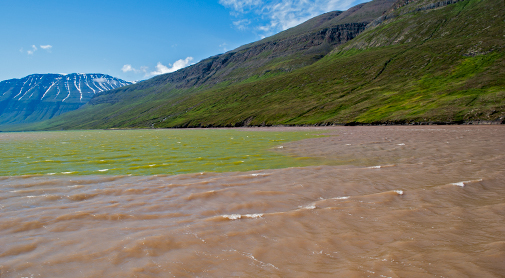 Disko Fjord, in which the green seawater, full of algae, is mixed with the brown, iron- and
particle-rich meltwater. Photo Thor Nygaard Markussen

Algae in the Arctic and Antarctic seas are dependent on the supply of nutrients from land and ice masses in the area. Algal primary production is important for the ocean's capacity to absorb CO2 from the atmosphere and is therefore particularly relevant in relation to climate change in polar regions - not least in relation to changes in sea ice and fresh water influx from land. In the Southern Ocean near Antarctica, it is well known that a lack of iron, one of the main micro nutrients, is limiting that oceans primary production and reduce CO2 sequestration.

The new research shows how the supply of iron in the melt water from land to sea is largely determined by the fine particles, which accumulates in aggregates, called flocs. As a result of the ongoing warming of the Arctic, there will be more and more melt water from areas with glaciers. The meltwater brings large quantities of sediment and dissolved substances into the sea, including iron. The present study is based on a Greenlandic fjord and shows how particles and iron flocculate, and thereby alters how fast the particles precipitate, and how far the associated iron can be carried out in the surrounding seas. In contrast to what is generally believed, the flocculation results in very low settling velocities of the constituent particles due to the fluffy and irregular shape of the flocs. The result is that the particles and the associated iron are transported further offshore than normally assumed.

The study is part of Thor Nygaad Markussens PhD thesis at CENPERM at the University of Copenhagen under the guidance of Professor Thorbjørn J. Andersen and Professor Bo Elberling . The dissertation is titled "Flocs in focus - how imagery and dynamics of suspended particles unravel land -sea links”

Link to the article

Online publication in the
open-access journal