researchers will improve the understanding of processes controlling the preservation of archaeological sites in Greenland and develop research based tools that can be used for locating and managing sites at risk. The research project "Remains of Greenland" is supported by the VELUX FOUNDATION with five million kr. 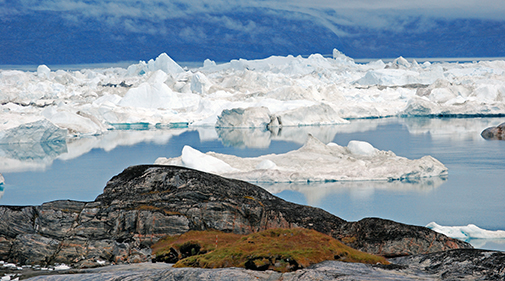 The Qajaa settlement is located on an isthmus on the southern side of  the world famous Ilulissat Isfjord. The Qajaa midden consists of thick layers of bones, derelict tools and other leftovers. Photo: Jørgen Hollesen, National Museum of Denmark

A single human hair found in a Greenlandic kitchen midden has given new insight into the first Greenlanders genome. Thanks to permafrost, the hair was preserved for more than 4000 years. But even in areas without permafrost in the southern parts of Greenland exceptional findings of well-preserved objects of wood, bone, fur, leather and textile have been made. The objects are safe and secure in the cold, damp and oxygen-poor deposits. At least for a while. Climate change is detrimentally affecting preservation conditions. The hitherto well preserved archaeological deposits may thereby be exposed to accelerated breakdown and their cultural and scientific value may be lost. The project Remains of Greenland is initiated as a direct response to the threat from climate change and to the enormous challenge the National Museum of Greenland is currently facing.

The project is led by Jorgen Hollesen senior researcher at the National Museum's Department of Environmental Archaeology and Material Research.

- We cannot prevent climate change, but we can try to limit the damage as much as possible by developing predictive models that show which areas are most vulnerable to the climate threat, says Jørgen Hollesen.

Therefore, he and a team of researchers from the National Museum of Denmark, the Greenlandic National Museum and Archives and Center for Permafrost, University of Copenhagen are going to identify threats to the Arctic heritage and create models that can assist the Greenland National Museum to pin-point the most vulnerable areas and thereby help to prioritize and optimize future archaeological investigations.The research project will begin 1 March 2016 and run for 3 years.

A detailed description of the project can found at www.remains.eu and here (pdf)

A) The big and permanently frozen middens in the beautiful Disko Bay provide an unparalleled insight into the culture of the very first people in Greenland, e.g. knives with preserved wooden handle from the Saqqaq culture.

B) The discovery of eight mummified people in two graves at Qilakitsoq near Uummannaq, North Greenland, is unique for the entire circumpolar region inhabited by Inuit and has provided a detailed insight into traditional Inuit clothing in the 1400s.

C) The collection of 70 well-preserved costumes and costume parts from the Norse cemetery in Ikigaat, known to the Norse as Herjolfsnes, in southernmost Greenland constitutes the main source of knowledge on medieval Nordic everyday clothes. Photos: Greenland National Museum and Archives