Increased vegetation in the Arctic may counteract global warming

in barren, arctic ecosystems. A study at CENPERM and Lund University in Sweden shows that microorganisms in the soil are triggered to break down particularly nutritious dead parts (such as leaves) of the shrub plant. Meanwhile, the overall decomposition of dead plant material is reduced, which could dampen the emission of CO2 from the soil to the atmosphere. However, the CO2 emission will still be stimulated by higher temperature. 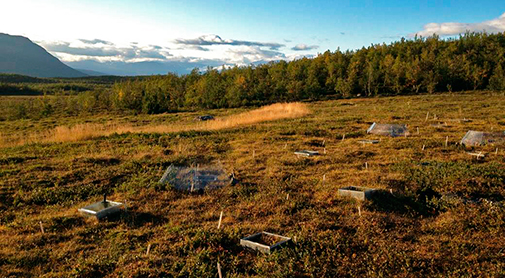 New study indicates that changes to the vegetation in the arctic region, imposed by a warming climate, may have inhibiting effect on global warming. Photo Anders Michelsen

A large amount of the Earth’s carbon and nitrogen is stored in permafrost, and climate change causes the permafrost soil to heat up. Together with Johannes Rousk, Lund University, CENPERM researchers Kathrin Rousk and Anders Michelsen conducted field studies at Abisko in the very north of Sweden, studying what happens to the decomposition of organic material as the climate gets warmer.

Watch short interview with Johannes Rousk and how increased vegetation in the Arctic region may counteract global warming.

“As the Arctic region becomes warmer, more shrubs start to grow, rather than moss which is difficult to break down. The shrubs have leaves and roots that are easy to break down and secrete sugar. What we have shown is that decomposer organisms, such as bacteria and fungi, are triggered to “mine” nutrient-rich organic materials that contain more nitrogen, while decomposition as a whole is reduced”, says Johannes Rousk.

When the nutrient-rich material is decomposed, the nutrient-poor part of the organic material will be more abundant, probably causing the amount of carbon to accumulate. Current climate models do not consider the connection between increased shrub vegetation as a result of ongoing climate change, and soils becoming more nutrient-poor.

“It will be exciting to see how this will affect the soil carbon turnover in the long term. Perhaps our results will help complement future climate models”, says Kathrin Rousk.

Today, no one knows what less nutrient-rich arctic soils and an overall decreased decomposition of organic material will lead to.

Future work in CENPERM will build on the observations in the subarctic soils and investigate these aspects in arctic permafrost soils, such as in large-scale field manipulation plots on Disko, W. Greenland, where we expose different tundra ecosystems to experimental summer and winter warming to mimic the consequences of climate change.