Permafrost thaw allows biological activity in previously frozen ground, leading to a potential release of climate-relevant gases. We have heard about carbon dioxide and the potential ’methane bomb’, but what about other gases? A new study from University of Copenhagen shows that soil microorganisms play an important role. 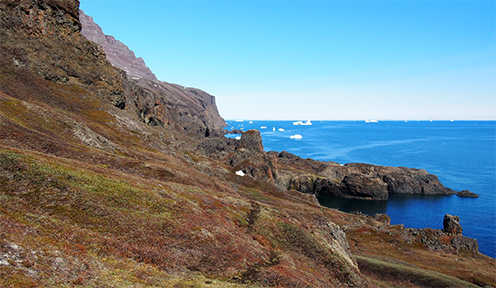 In a new scientific article published in the journal Nature Communications a group of scientists led by University of Copenhagen authors shows that thawing permafrost releases a high amount and diversity of volatile organic compounds (VOCs). These compounds are not greenhouse gases like carbon dioxide and methane. VOCs are known to be released from plants for example to cope with stress and to communicate with other organisms, but less is known about their release from soil. They react fast in the atmosphere and these reactions have several consequences. For example the production of ground level ozone, which is harmful for human health and toxic for forests. Perhaps the most important consequence of these reactions in the Arctic is the production of tiny particles that scatter solar radiation back to space and form clouds. This can have a cooling impact on climate.

Professor Riikka Rinnan from Department of Biology and Center for Permafrost, University of Copenhagen explains, ‘Surprisingly, our new experiments show that VOCs can be released from soil permafrost layers, which often represent organic material stored for decades or longer. Even more surprisingly, VOCs from thawing permafrost may not be released to the atmosphere, as our results show that the annual thaw layers above the permafrost seem to filter the VOCs being released from the permafrost.’

Soil microbes in a crucial role

Using advanced tracing techniques the research team shows, that the VOCs are consumed by microorganisms living in the soil layers. It appears, therefore, that the actual release of VOCs from thawing permafrost is determined by what happens to them on the way from the deeper soil layers to the atmosphere. If the permafrost is exposed to the surface e.g. due to erosion, or if the microbial uptake is hampered for example due to waterlogging, this could be a new, unaccounted Arctic VOC source with potential implications on the regional climate.

The work is a collaboration effort between bio- and geoscientists working together at the Center for Permafrost (CENPERM) at University of Copenhagen and in close collaboration in an international team. The study was supported by the Independent Research Fund Denmark and the European Research Council. CENPERM is funded by the Danish National Research Foundation.