The Arctic Station is located on the south coast of Disko Island in central West Greenland. It is facing the Disko Bay/Davis Strait and is characterized by an Arctic, marine climate. The station offers fantastic scenery with some of the world's largest icebergs drifting by and cliffs abruptly rising to heights of more than 600 meters behind the station. The broad windswpt valley, Blæsedalen, north of the station is home to two CENPERM snow fence experiments established in 20012 and 2013.

The main building with facilities for 26 guests and the laboratory building are located in a nature sanctuary, one km west of the town of Qeqertarsuaq (formerly Godhavn) with about 1100 inhabitants.

The Arctic Station buildings and logistics have been continuously modernized, expanded and developed. Therefore, the station now appears as a state-of-the-art platform for year-round environmental research. The Arctic Station is supervised by a board set up by the Faculty of Science, University of Copenhagen.

Bøndlundhus Station built as part of the The Danish Peary Land Expedition 1947/48. To day the station is an open museum with many interesting remains from 1947 including the very first Nescafe … Photo credit: Bo Elberling

Brønlundhus Fjord extent 23 km Northwest from the larger Independence Fjord at 82°N and surrounded by up to 800 m high plateaus. Lowlands are dominated by Quaternary deposits from deglaciation 8000 years BP including course fluvial and fine-grained marine sediments. The first observations from the area was made by Freuchen in 1915 reporting the marked marine terraces (strand lines) up to the early Holocene marine limit about 65 m above sea level. But also sand-wedge polygons, solifluction, rock glaciers, beautiful ventifacts are found in the area. The most dominating landscape is the vegetation-free wind-blown polar dessert.

The climate is High Arctic with a relatively warm summer of less than two months and a mean July temperature between 4-6°C. Precipitation is low, poorly described and less than 100 mm per year mostly as snow during winter.

Despite the harsh climate more than 100 vascular plants are known from North Greenland and during the 2014 season more than 62 species were found in the Brønlundhus Fjord area.

The 2014-season included field work from July 19 to August 3 by a CENPERM team including Mathias Madsen, Paul Christiansen, Jørgen Skafte, David Hopkins, Ed Gregorich and Bo Elberling. Activities included setting up a new Meteorological station to provide a water-energy balance, a nitrogen addition experiment with addition of both litter at the surface and as dissolved N near the permafrost table, a slope study, a methane-oxidation study, Salix dendrochronology study as well as a general study of landscape morphology – soil and permafrost characteristics. A detailed permafrost coring programme was completed in 2014. A revisit and sampling is planned in 2016.

Danmarkshavn is a small weather station located in the High Arctic in the Northeast Greenland National Park, the largest national park in the world. Danmarkshavn is the northernmost location on the east coast of Greenland that non-icebreaking vessels can access. Eight people permanently staff the station.

Kangerlussuaq (means Big Fjord; Danish name: Søndre Strømfjord), is a recent settlement located at the inner end of the fjord of the same name. While Inuit hunters certainly visited Kangerlussuaq, there appears never to have been a settlement at the location. It is Greenland's main air transport center with the largest commercial airport. The airport dates from Second World War, when the site was known as Blue West-8. The settlement has a population about 600 who are almost entirely reliant on the airport and tourist industry. Kangerlussuaq International Science Support has easy access as it is located near the main international airport in Greenland.

Kangerlussuaq is at the southern border for continuous permafrost and the landscapes hold great opportunities for studies along different permafrost gradients. Here, the Greenland ice sheet is easily accessible and CENPERM researchers study the surface of the ice sheet (see e.g. the paper in Nature Geoscience by CENPERM scientist Marek Stibal), the proglacial areas, and the main river flowing out of the ice sheet.

Permanent data logging equipment and a climate station have been installed for obtaining relevant data (climate and soil properties). Within the area three sites have been selected based on differences in plant cover, exposure and height. Here, we measure the emission of halogenated volatile compounds.

Narsarsuaq (means great plain) is a settlement in southern Greenland with only 160 inhabitants. It was the principal settlement (Brattahlid) for Erik the Red and his son Leif the Happy about 900 AD. During the Second World War USA air force built an air base (Blue West One) for refueling aircrafts bound for Europe. The ruins of a former military hospital can still be found just east of the settlement. In 1958 the airbase were abandoned. Today, Narsarsuaq has an international airport.

At the location, permanent data logging equipment and a climate station collect climatic data and data on soil properties. Within the area three study sites have been selected based on differences in plant cover, exposure and height. Measurements of emission of halogenated volatile compounds are carried over a two years period. In addition, soil samples are taken from the sites for measurements in the laboratory.

Mestersvig is a military outpost with a runway and a permanent population of two people located 200 km north of Ittoqqortoormiit (formerly Scoresbysund) on the east coast. The runway was originally built to serve nearby mining explorations. 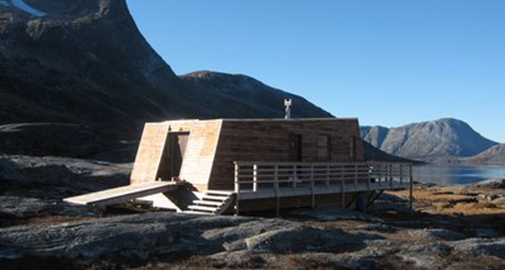 The study site of Nuuk Basic is situated in Kobbefjord in Low Arctic West Greenland, 20 km from Nuuk, the capital of Greenland. Nuuk Basic is an extensive cross-disciplinary ecological monitoring program, which studies the effects of climate change on terrestrial and marine ecosystems. The program was fully implemented in 2008 and will provide long time series of data on the dynamics of a Low Arctic ecosystem.

Focus is on climate change effects and feedbacks in both the marine and the terrestrial compartments of the ecosystem. The drainage basin of 32 square kilometers at the head of Kobbefjord is situated in an alpine landscape with mountains rising up to 1400 meter above sea level and glaciers covering approximately two square kilometers. The terrestrial setting is diverse and includes the most typical vegetation types of a Low Arctic ecosystem within a small area.

A field station with accommodation facilities for four persons at a time supports Nuuk Basic staff and visiting scientists.

The scientific components of the program are coordinated by the Nuuk Basic secretariat at the Department of Bioscience at Aarhus University, Denmark.

The city of Qaanaaq, located in the far north west of Greenland, is a small isolated town on the shores of the Inglefield Fjord. Its 600 inhabitants are the only ones in Greenland living on sedimentary deposits, making the city susceptible to problems with ground stability and erosion.

These issues led to an extensive scientific study, including several geophysical methods and 26 boreholes, distributed in and around the city, investigating the sedimentary structure to a depth of up to 20m and monitoring the thermal regime since 2017. A field campaign has been conducted on the sloping area east of town, collecting soil and water samples and installing equipment monitoring climate and soil data since 2018. It also hosts a treatment site, where 50m3 of surface near sediment where moved to simulate effects of permafrost thaw and active layer deepening. 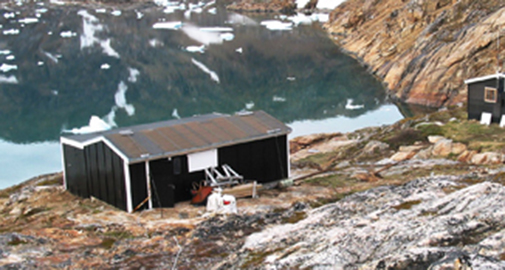 The field station is situated in South East Greenland 20 km west of Tasiilaq – which with its 1900 inhabitants is the most populous town on the east coast. Transport to the station is by charter-helicopter, boat or on foot.

The station is not permanently staffed, but during most of the summer researchers will be working here. For security reasons, it is required that at least two people are present at the station at the same time.

The military base of Station Nord in North East Greenland is the most remote location of the Danish Army, only 933 km from the North Pole.

The base is the gateway to northernmost Greenland and plays an invaluable role for both the Danish Army and for science.

It is located in a flat but beautiful area in Kronprins Christian Land. The station is permanently staffed with five persons from the army, even during the four months of darkness. During summer the station can host up to 20 scientists.

The average temperature at Station Nord is -14°C and in February the temperature may reach -50°C. Due to an annual precipitation of less the 100 mm the surrounding landscape is a High Arctic desert.

From 2013 and onwards, the research facilities will be substantially upgraded, thanks to a a major grant to Aarhus University from the Villum Foundation. 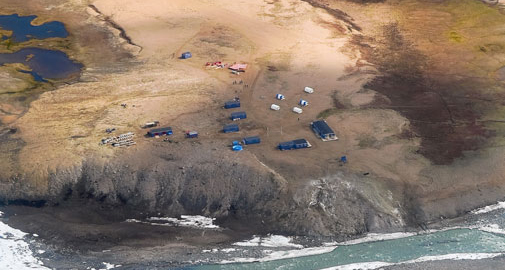 Zackenberg Research Station is located in the high arctic Northeast Greenland, 25 km northwest of the settlement Daneborg - a military outpost with twelve inhabitants. During the brief summer of the high arctic Zackenberg is alive with researchers and logistics staff.

Since its official opening in 1997 the research station has provided accommodation facilities for 25 persons at a time and has several laboratories at disposal for guest scientists.

Zackenberg lies 2 km inland on the south coast of Wollaston Foreland peninsula at Young Sound. The surrounding study area is covered with continuous permafrost with an active layer thickness varying from 20 to 100 cm with the deepest thickness in dry areas.

The margin of the Greenland Ice Sheet is located 60 km to the west of the station. The study area was de-glaciated about 8,000 years ago. Today it holds a great diversity of biotopes like ponds, fens, heaths and grasslands.

The long-term monitoring program Zackenberg Basic has since its establishment in 1995 been the most comprehensive, cross-disciplinary ecosystem monitoring program in the polar regions – the Arctic as well as the Antarctic. It provides access to a wide range of both biotic and abiotic data. Zackenberg Research Station is operated by the Zackenberg Secretariat at the Department of Bioscience, Aarhus University, Denmark.