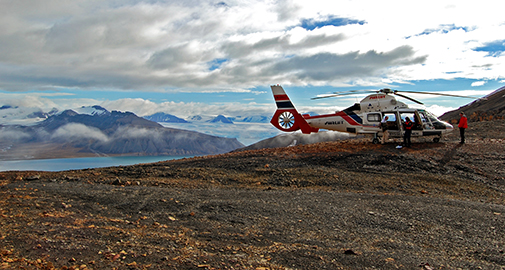 The seven islands of the Svalbard archipelago are located in the Arctic Ocean between 74° to 81° N latitude and 10° to 35° E longitude. The mountainous islands comprise an area of 63.000 km2. 60 % are covered with glaciers, and continious permafrost up to 500 m thick is present in the high-arctic periglacial landscape. Longyearbyen, the main settlement, has 2000 inhabitants and is located at the mouth of Adventdalen valley in the central part of Svalbard. With the University Centre in Svalbard (UNIS), the world’s northernmost institution for higher education, Longyearbyen is a center for Arctic research.

CENPERM researches work mainly in the glacially eroded Adventdalen valley (78°09’-78°14’N, 15°41’-17°02’E), which is 35 km long and 3 km wide. With the river Adventelva it drains westwards into Isfjorden. The mean annual air temperature is approximately -6°C; the average annual precipitation is only 190 mm, making Adventdalen one of the driest parts of Svalbard. The permafrost is the warmest this far north in the Arctic, with ground temperatures from -3˚C to -6˚C.

The Adventdalen valley bottom is covered by fluvial sediments with braided river plains and terraces along the sides. The valley encompasses a highly dynamic landscape with a range of periglacial landforms present: Ice-wedge polygons are widespread and today actively cracking. In addition, rock glaciers, pingos, solifluction and sorted cycles occur. Geologically, the Adventdalen area comprises flat-lying, sedimentary rocks of Early Permian to Eocene age. Coal is being mined from the Tertiary sandstones along the south side of Adventdalen, just as natural erosion and deposition of this coal occurs in the valley.

Strong winds, blowing down valley in Adventdalen from the SE, are dominant in winter and cause a generally shallow snow cover. The influence of the wind on the geomorphological activity in Adventdalen is determined by the regional air flow, not by local conditions.