shrubs and trees expand northwards in the Subarctic: New results show that also more nitrogen may be fixed from the air.

Enhanced nitrogen fixation stimulates plant growth. Fixation of nitrogen from the air is in tundra to a high degree performed by cyanobacteria associated with mosses, and this process is promoted by warming in northern Scandinavia. However, as taller shrubs expand into the tundra, nutrients in their leaf litter will either promote or reduce the nitrogen fixation, depending upon which shrub species that will dominate. This has recently been shown by scientists Kathrin Rousk and Anders Michelsen from Center for Permafrost and Department of Biology at University of Copenhagen, and published in the widely recognized scientific journal Global Change Biology. 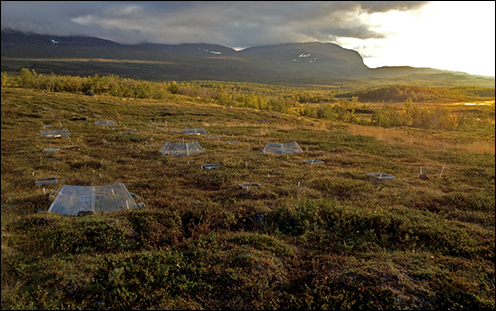 Climate change will have a profound impact on high latitude ecosystems like subarctic tundra due to an increase in temperatures of 2 – 5°C towards the year 2100. Besides the direct effects of increased temperatures on processes like nitrogen fixation, shrubs are expanding into northern latitude ecosystems, at the expense of typical tundra plants such as mosses and dwarf shrubs. In addition to the increased biomass of taller shrubs in these ecosystems, the amount and quality of litter input (e.g. leaves) will change, with significant implications for nutrient turnover in these nitrogen poor ecosystems.

Unlike more densely populated and polluted areas, northern latitude ecosystems receive only low atmospheric nitrogen deposition rates (~2 kg N ha-1 yr-1). But most mosses in subarctic tundra are colonized by bacteria that fix atmospheric nitrogen (N2), and together, they can contribute 50% to total ecosystem N input. Despite this key role, the effects of climate warming and increased litter input as a result of shrub expansion on N2 fixation in mosses are ambiguous.

To aid in predicting the role of moss-associated N2 fixation in a warmer, future climate, researchers from the Univ. of Copenhagen, Center for Permafrost and Dept. of Biology, Kathrin Rousk and Anders Michelsen, have modeled N2 fixation throughout the snow-free period in subarctic tundra. They used data from a field experiment close to the Abisko Scientific Research Station in Northern Sweden, in which climate change was simulated with open top chambers to increase the air and soil temperature, and with addition of plant litter from willow and birch-shrubs.

They found that N2 fixation was highest in the warmed and in the birch litter addition plots (around 3 kg N ha-1 yr-1), while the willow litter additions lead to decreased N2 fixation rates (less than 2 kg N ha-1 yr-1). Kathrin Rousk concludes that: “Warming will lead to increased N2 fixation rates in mosses, while the consequences of further shrub expansion will depend on the dominant shrub invading: the expansion of willow will likely limit the N input via N2 fixation, whereas a predominance of birch shrubs will increase N2 fixation and with that, N supply to the ecosystem”. The amount of N that is fixed is important because it influences how much CO2 that plants are able to acquire through photosynthesis, and hence it impacts the carbon balance.

Micrograph of moss leaves with an insert micrograph of cyanobacterial cell chain (red) on a 0.1 mm fraction of a moss leaf (green) by Kathrin Rousk. The micrographs were taken using a fluorescence microscope with a green filter (200x magnification).

Rousk K., Michelsen A. (2016) Ecosystem nitrogen fixation throughout the snow-free period in subarctic tundra: Effects of willow and birch litter addition and warming.