Arctic heating from within

Arctic soil microbes could enhance permafrost thaw and the release of carbon to the atmosphere, according to a paper published this week in Nature Climate Change. 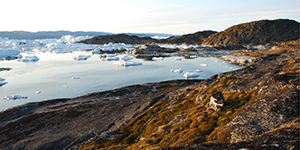 As global temperatures rise and permafrost thaws, the breakdown of organic material in the soil is expected to accelerate. The process by which this decomposition produces heat and may accelerate further thawing is not well understood. ”We have quantified microbial heat production in samples of organic permafrost soils collected from six sites across Greenland to investigate whether enough heat can be produced by enhanced activity to affect the rate of soil decomposition” tells professor Bo Elberling.

The model simulations reveal a feedback loop between soil temperatures and carbon decomposition that could accelerate rates of permafrost thaw and microbial heat production within the next 50-100 years. The study shows that this process can degrade evidence of early human activity in the Arctic, preserved in organic middens — archaeological features buried in the permafrost. The feedback loop seem to be important for organic middens in particular, and the results presented suggest that actions are needed to preserve these features in the future.

Link to the scientific article